With SEC examinations ramping up and PTE 2020-02 deadline around the corner, we invited Issa Hanna from Eversheds Sutherland and John Carl from Retirement Learning Center to share their observations regarding Reg BI examinations and enforcement and what firms and financial professionals can do to mitigate risk.

Parham Nasseri (PN): What were the biggest takeaways from 2021 on Regulation Best Interest (Reg BI)?

Issa Hanna (IH): Before I get to the events of 2021, I wanted to go back to an important event that was hosted by certain FINRA SEC staffers in October 2021 that I think ended up foreshadowing the regulator feedback that we ended up getting in 2021. During that roundtable, those key staffers spoke about common deficiencies they saw as part of that initial round of exams that I think are really relevant to the discussion that we’re having here today.

They commonly saw a lack of meaningful improvement in existing suitability-based policies and procedures. They also commonly saw that firms were not training reps on which costs to consider and how to identify reasonably available alternatives in connection with Reg BI’s Care Obligation. They also saw that firms were solely relying on certifications from reps that they were making best interest recommendations, rather than adopting policies and procedures and providing meaningful training to those reps.

In terms of things that are relevant to our discussion today, they pointed to new systems to document recommendations and comparisons of reasonably available alternatives, reviewing the firm’s overall product mix for costly outliers and to ensure the availability of reasonable alternatives and requiring individual reps to take notes in their CRM around each recommendation to document compliance with the Care Obligation and provide supervisors a paper trail to monitor compliance.

To come back to 2021, I would say that the regulators were true to the form that they showed in that October 2020 webinar. They were looking for meaningful improvements in policies and procedures to meet the Care Obligation, examples of new systems to document the rationale behind recommendations, and that the comparison, with respect to other alternatives, was actually being conducted.

One of the key pieces of insights we’ve gained from speaking with our clients has been that more can be done on the Care Obligation front. 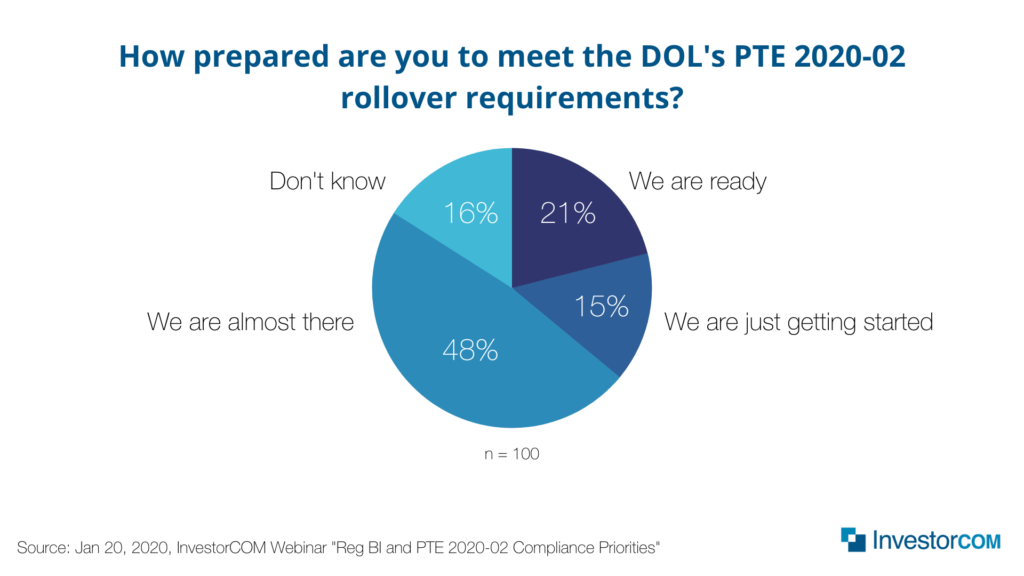 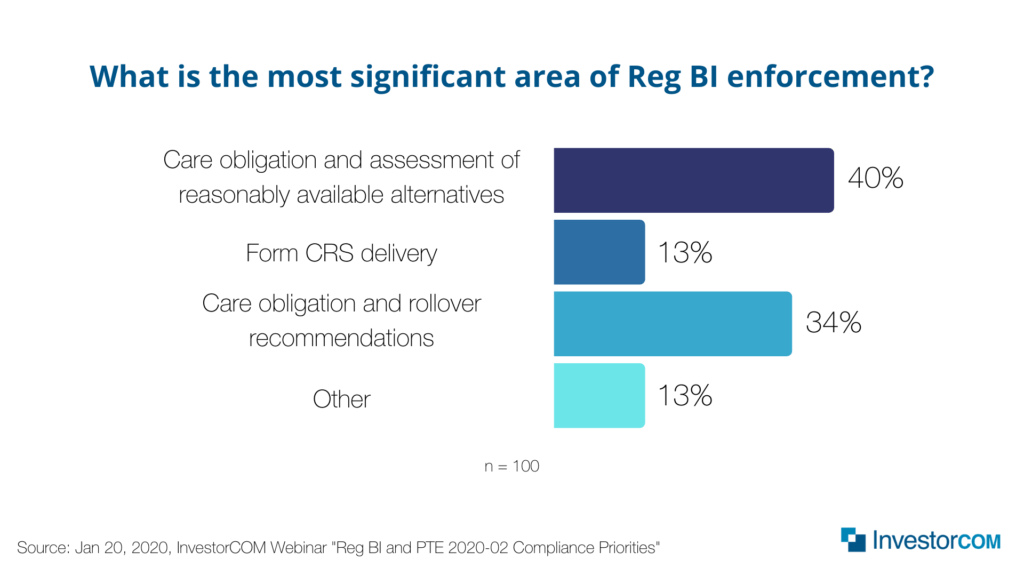 PN: What are your thoughts regarding the recent North American Securities Administrators Association (NASAA) survey that was released?

IH: To put it mildly, NASAA was not impressed by the progress that firms have made in implementing Reg BI and meeting a best interest standard of conduct. The report was very heavily focused on specific products that they believe are overly costly, complex, and risky. They were focusing on things like variable annuities, private securities, REIT’s, and leveraged and inverse ETFs. The report was really singularly focused on those products and what improvements firms have made to supervise the sales of them, what things firms have done to mitigate the conflicts associated with them, and what disclosures they’re providing to retail customers at the point of sale about those products – their costs, complexity, risks and the conflicts associated with them.

I was a little dismayed by the report because I thought that they were not giving credit to the industry for a lot of the meaningful improvements that the industry has made in response to all the rulemaking that happened in 2019. They weren’t really giving any credit to the industry for all the improvements they made with respect to rollover recommendations, account-type recommendations – no credit given to firms on their Form CRS disclosures. They were really just focused on these complex, costly, risky products and not really paying attention to anything else, which I think a lot of people will say amounts to meaningful improvements over the old standard of conduct that existed pre-Reg BI, pre-Form CRS. So, in terms of what the SEC might make of the NASAA report, I think it’s a bit unclear at this point what the SEC will make of it but I think the SEC has provided some clues about maybe what they’ll make of it based on their (at the commissioner level) comments about what they plan to do about Reg BI, particularly the comments made by Chair Gensler and the two other commissioners from the Democratic side of the aisle. Generally speaking, they think that they should continue to study what tangible improvements that firms have made as a result of Reg BI, so presumably the NASAA report will factor into the study that they’re doing with respect to Reg BI, and whether firms are meeting Reg BI best interest standards to the letter. Depending on how they assess how Reg BI is working, they might take additional steps. Those steps might range from providing additional guidance, taking enforcement against certain firms to send a message to the industry, or potentially amending Reg BI if they don’t think that what they have to work with is good enough. That’s the range of possibilities to potentially expect on the horizon.

PN: Mr. John Carl, your firm helps train advisors across the country. What have you been hearing on the Reg BI front? Are firms or advisors taking steps to act in their clients’ best interest?

John Carl (JC): They are, Parham, they are. Obviously, as a training firm, we work with the firms at the firm-level and then down to the rep-level, so as a training firm I can just tell you that the amount of training that’s been going on about the environment has certainly increased. There’s been a lot more training of advisors as to what Reg BI is. I don’t know if this is a constructive thing to say on the call, but I think quite frankly compared to some of the other measures that the DOL had been focusing on, which go back to previous administrations on the DOL side of things (best interest contracts, BICs), I got to tell you, I think there was somewhat a sense of relief around Reg BI – that it was manageable. But there’s a whole lot more training that’s going on and I think as you start layering on Reg BI on the SEC side with the DOL and PTE 2020-02 in addition to training, you’re seeing tools too, which came across in your survey. I think there’s a lot more training that’s going on with the Reg BI front and I think there’s a feeling in the firms we work with that they’re confident. I know some of their reviews weren’t as pleasant as they thought they might be, but the sense is manageable, more training, and with the DOL coming on, more tools.

PN: One of the primary points of confusion from making product recommendations that are in the client’s best interest and assessing reasonably available alternatives. In your view, how does this differ from FINRA’s Suitability Rule 2111?

IH: It’s fair to say that the old suitability standard that existed under Federal Rule 2111 did not include an obligation to consider reasonably available alternatives. That was not something that was a component of the suitability standard at all, so this is a new standard. To be honest, it isn’t really anything that exists anywhere in the federal securities laws. I think it’s fair to say that the industry and the regulators are kind of figuring it out as we go given that it’s a completely new standard.

I think at a minimum, the obligation requires you to consider whether there are any less costly, less risky, or less complex products that are out there that can achieve the same objective that the retail customer has. At its essence, that’s what the requirement is, but in implementation I think there’s a long way to go to figure that out. I think we’re going to see this sorted out through deficiency letters and (hopefully not), through enforcement actions and further guidance. I think its too early to say at this point whether there are specifically defined standards on how to do this, but at a minimum, I think we’re talking about an obligation to consider whether there are less costly, less risky, and less complex alternatives out there that can essentially achieve the same objectives that this retail customer has.

PN: Reg BI enforcement has been a hot topic that has been catching headlines. Many are expecting enforcement activity to ramp up on Reg BI – what have you seen to date, and what can firms and financial professionals do to mitigate this risk?

The second thing to do is to roll out meaningful training to explain to reps exactly what costs they need to consider when making a recommendation, and how to identify reasonably available alternatives.

The final thing is documentation – ensuring that you have a good process to document every recommendation and that you’re going through that comparison process of reasonably available alternatives in connection with all recommendations, especially any recommendations involving a product that is deemed to be costly, complex or risky.