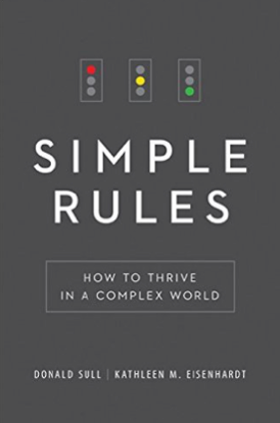 I recently stumbled upon the book “Simple Rules….How to Thrive in a Complex World” written in 2015 by Donald Sull and Kathleen M. Eisenhardt. Research by these authors reveals that exceptional company performance, in a wide range of industries facing both resource limitations and chaotic conditions, share a common theme: The best companies use simple rules to cut through complexity and make critical decisions.
They codified their research insights into a 3-step model:

Figuring out what will move the needle is about clarifying the underlying drivers of value creation. Choices around markets or customers targeted, products offered and knowledge of profit drivers of the business can define this focus. Choosing a bottleneck involves describing the specific activity that will or is hindering the company’s ability to move the needle. The key is to focus on bottlenecks that have direct and significant impact, are recurring activities, and involve limited resources. Crafting rules entails choosing a small number (often 3) that will serve as the filter for decision-making. Because of the non-prescriptive nature of simple rules, there is plenty of opportunity to apply discretion.
One of the examples cited was Airbnb during start-up, as they tried to build both sides of the market to create the “network effect” required in a shared-economy company. They knew that achieving critical mass would move the needle, but one bottleneck was their initial geographic market choices, where they focused on cities that hosted conventions. After completing the Y Combinator program their simple rules that vaulted them forward were: 1) Enter international destination cities 2) Focus first on recruiting hosts 3) Share hospitality principles to hosts such as professional-quality photos.

Examples in this book are as broad-ranging as Amazon, Apple, the world’s Central Banks, Pixar, the Jesuits, Netflix, the race to the South Pole between Robert Scott and Roald Amundsen, as well as many YPO (Young Presidents Organization) companies around the world.

Although the authors’ focus was not the financial services industry, the concepts apply exceptionally well in this space. As a highly-regulated market facing disruptive dynamics, there is ample opportunity to use this model to tackle the growing complexity, with simplicity. In the words of the authors: “When business becomes complicated, strategy should be simple.” Sage advice.