Parham Nasseri [PN]: Tom, as a former executive heading up regulatory policy at FINRA, do you believe Reg BI has met its intended purpose?

Tom Selman [TS]: Even though we’re a little over two years into the implementation, Reg BI is still in its infancy. We don’t know exactly how the SEC is going to interpret definite aspects of Reg BI, how aggressively it will enforce and how it will enforce Reg BI, or how FINRA will do this as well, and how if there’s a change in administration, for example, and you have a different SEC how things might change.

The poll in Figure 1 indicates that Reg BI is also in its infancy even in the compliance shop firms. I think many firms are going to decide it’s much easier to leverage technology and a good application to help make their decisions much more consistent concerning Reg BI than a manual process. 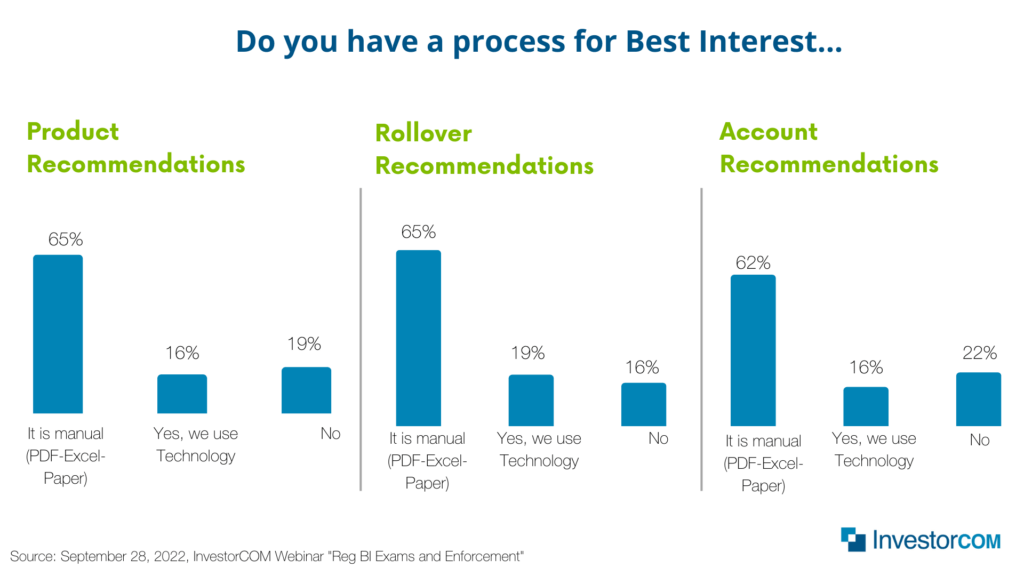 Even though the regulation is in its infancy, Reg BI did accomplish important goals: it established principles by which recommendations to retail investors would be made; it brought the standards for broker-dealers up to a standard that’s on par with this, the fiduciary standard. For investment advisors, without actually imposing a fiduciary standard that would have crushed the commission business. It didn’t impose undue detailed requirements that would have hampered the ability to comply with these principles. If it’s allowed to really put to rest the whole concern about the absence of a fiduciary standard for broker-dealers, by imposing a best-interest standard that is in some ways, even stricter than what applies to investment advisers.

So, at this point, it appears to have met its objectives, but it’s still in its infancy.

PN: Thank you for sharing that, Tom. Now there’s been several headlines both across the Reg BI journey and most recently about the SEC asking Congress for additional funding, possibly to ramp up Reg BI examinations. Tom, what do you make of that request to Congress?

TS: As a taxpayer, I’m sure they could find the money. From the perspective of firms, obviously, the SEC is just getting started in its enforcement. We know that there’s a case that they filed and there are other cases in the works under Reg BI. In these cases they’re not going to just deal with minor compliance issues, they’re probably going to deal with how products are recommended and how the Care Obligation is not met in the view of Commission staff.  They will dedicate resources to this effort. I think the current SEC, will not try to amend the rule.  I think they’ve shown that already, but I think they will try to bring the cases to make Reg BI read as expansively as possible, as close to a fiduciary standard as possible, and they’re going to need enforcement cases to do that.

Issa Hanna [IH]: What they said specifically in that report on their strategic priorities is that they plan to bring cases for failure to act in the retail customer’s best interests when making recommendations. That might sound kind of generic or non-controversial. If we read between the lines, I think their intent is to show people how the Reg BI best interest standard of conduct works in action.

I think Tom is absolutely right. The request for additional funding really ties into this intent or plan by the staff at the SEC to illustrate through enforcement how they intend to regulate firms under Reg BI. I think there’s every indication that they plan to take the same regulation-by-enforcement approach under Reg BI that they’ve historically taken under the Advisers Act fiduciary duty.

The language in that report says they plan to bring cases on this, not just for the sake of slapping people on the wrist with technical violations of Reg BI, but for the purpose of sending a message and illustrating the new principles-based regime. I think they plan to focus on best interest recommendations and specifically that compliance with the Care Obligation is consistent with other messages that the SEC and the staff have been sending.

And we’ll be talking more about that case later on, but, looking at it at a high level indicates:

PN: Thanks Issa. What do you make of the specific degree of scrutiny around effectively if you want to call it pre-trade recommendation activity across the wealth management space?

IH: I would say in general the approach that they’re taking is needing to prove that you have met your obligations to act in the customer’s best interest. And how do you prove it without contemporaneous documentation? Overall, there’s this real focus on compliance with the Care Obligation. They are not just looking at your policies and procedures, they’re looking at things on a recommendation-by-recommendation basis and specifically, they’re looking for documentation associated with each recommendation to show that.

Number one is to have a process, but you also need to follow that process on a consistent basis with respect to each recommendation.

PN: Ben, you sit on the other side of these regulations, meaning as a CCO you have to put them into action. What are the approaches you’ve taken across your firm to tackle these specific regulations?

Ben Westin [BW]: The important thing is having a process and then making sure you follow it within your principal review steps. We’ve engaged with the InvestorCOM team to stack on some technology solutions, whether that be ShelfMonitor to manage and monitor our shelf and using PeerCompare and RolloverAnalyzer applications for making best interest security and rollover recommendations.

It’s also about making sure that our field force sort of understands, 1) the regulation, 2) what we’ve done to cover ourselves with regards to the technology, and then making sure they understand what we’re looking for when they send paperwork for that recommendation up through our system. If they don’t or if there’s something missing, then we’re having those conversations with them about what we need with regard to reasonably available alternatives, what sort of analysis we want to see on file, and then ultimately what makes us comfortable with the recommendation itself.

From there, it’s just continuing to have conversations with folks in the industry about what they’re seeing, what exams they are focusing on, making sure we’re paying attention to what’s coming out as far as enforcement and then taking that and using it as a lens for our own process to make sure that when we ultimately get the microscope on us from the SEC or FINRA we’re comfortable with our process and sort of able to have conversations about it and ultimately defend it should any issues come up.

PN: Randy, over the past few months you’ve played a critical role in helping our clients and prospects meet the specific requirements across the industry. Are there any general trends that you’re seeing around FINRA and the SEC examinations as they relate to Reg BI?

Randy Barnes [RB]: It’s pretty consistent with what we’ve been hearing from today’s panelists, which is one of the first things they’re asked about is their Reg BI process, their policy procedures, the application of them. It’s very clear to me from talking to clients that this is going to be a big thing.

I was in Charlotte recently for the SIFMA C&L seminar and almost every session had some level of discussion around Reg BI, whether it be from SIFMA, the SEC or FINRA. One of the SEC representatives there used the phrase ‘They’re really digging in” meaning they’re going beyond the cursory review which I think emphasizes their ask for additional funding.

If you enjoyed this article, you can listen to the full discussion online – Watch the replay of the webinar, Reg BI Exams and Enforcement.

During the webinar, we also provided attendees with a sneak peek of InvestorCOM AccountCompare. To see a demo of this solution, visit www.investorcom.com/demo